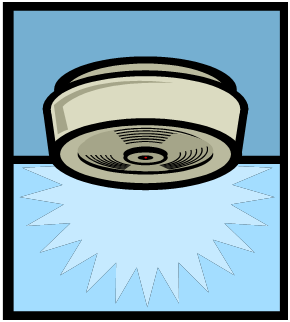 Yesterday, I posted about how my smoke detectors started the “low battery beep” about 5 a.m. on Sunday morning. I still maintain that they were beeping just to tick me off, but my husband keeps reminding me that smoke detectors are machines, and not sentient. Riiiiggghttt. I’ve seen enough of the Matrix to know that I don’t trust anything that still works even when its’ batteries are removed.

We have four built-in smoke detectors throughout the house. Two are obviously in bedrooms, one is in a front room that could be labeled as a bedroom, but we use the room as a billiard/guy room, and another detector is about 4 feet away from the billiard/guy room in a hallway.

Annoyed as can be, my husband decided to kick this problem in the pants, and changed all the batteries in all the smoke detectors. Problem solved…or so we thought.

Right about the time I came dragging home after working severe overtime last night, that bleepity-bleep-bleep beeping started again. I won’t tell ya the litany of swear words that followed, but I finally invoked Google, and we tried every solution I could find: cleaning the detectors with canned air, resetting them all, and removing and reinstalling the batteries. I became convinced that we had a defective smoke detector somewhere in the house, and were going to have to replace and re-wire them all.

As I went into the bathroom, the dang beep sounded again, and I told my husband that I swore I could hear it in the bathroom.

On a side note, the guest bath has a built-in shower that has stone walls about 8 feet high (and we have 10 or 12 foot ceilings), thus creating about 3 feet of super-high ledge that I am too lazy to dust.

Well, my husband walks in the bathroom, stands on the toilet, and pulls down an old carbon monoxide detector that the previous owners left sitting back on the top of the 8 foot-high shower wall.

We looked at each other and all I could say was, “well, sh*t.”

Needless to say, that carbon monoxide detector is now in shattered pieces across my dresser.