With all of the chaos of the move, I have been in a big-time cooking rut. I can’t entirely blame the move, however. Though they continue to improve, my kids are still extremely picky eaters. Together, they only have about 3-4 meals each that they actually “love,” and like any kid, they are prone to decide they don’t like something before they even try it. Every day, when I pick them up from school, they ask what’s for dinner before their butts hit the car seat. If my answer isn’t one of these 3-4 meals, I get the long-suffering groans and the sad, disappointed faces. Let me tell you, that wouldn’t inspire anyone to hop in the kitchen and cook. It’s hard to make the effort sometimes when you know dinner will be a fight of me watching them push the food around their plates with frowns on their faces. Despite this daily battle, I’m still holding fast to my philosophy that this is not a dang restaurant. Every meal is not going to be custom-tailored to special snowflake taste-buds, and they’ve been told repeatedly to build a bridge and get the heck over it.

My husband is also fairly picky, though he swears he is not. However, he hates onions, broccoli, Brussels sprouts, green onions, squash, zucchini, spinach, shrimp, gnocchi, artichokes, mushrooms, and quite a few other things. So, yeah…But, he at least always is up for trying something new…except for the aforementioned items, of course.

So, to get out of my cooking rut, I decided that I would try at least one new recipe every day this week. Last night, I experimented and made Korean Beef Tacos with a Cucumber-Carrot Slaw to go on top. Though the kids balked at the cucumbers, they did eat the beef, and my husband and I loved the tacos as a whole. I wish I was able to take pictures, but after just getting off of a 15-hour bus ride for a school trip, my husband and Heathens were hungry, and I wasn’t about to test their patience with a photo shoot. I also made bread pudding for the hubby (as seen above), and topped it with Whiskey Sauce:

This was my first foray into bread pudding, and I used this recipe as a baseline. Overall, it was okay, but we decided it definitely needs some tweaking. My husband said it needed more raisins and cinnamon, and maybe a bit more time to set up before serving. However, the recipe itself was a good starting point. The whiskey sauce is awesome, but if you’re sensitive to hooch, I’d cut it down a bit…we are not so afflicted, however.

So, all week I will be plowing through new recipes, and getting my kitchen mojo back. The Heathens may riot before the week is out, or they may actually try something new and like it.

G-Man is 12 today. How in the hell did that happen?!? Just yesterday, Demon-Baby was terrorizing us to the point of me begging for a priest and some holy water. Today, I have a (are you f-ing kidding me?!) pre-teen who is just shy of high school and whose feet are bigger than mine.

Waaaayyy back in the day, I decided to get less fat, and after about a year of hard work, I was rocking jeans I hadn’t worn since early high school. I was proud, and life was great. But then, I got pregnant with Bean. And then I decided to work from home as a freelance writer. And then I moved. And then…well, you get the idea. I’ve tried to reboot my level-headed, not-too-difficult diet/fitness efforts along the way, even going so far as to be able to run 5K on the treadmill without wanting to kill myself, but I’ve always fallen short of sticking with it the way I used to. Running everyday is kind of pointless if you are just going to replace those calories with whiskey, wine, and any food that holds still long enough for you to eat it.

So, after much reflection, I realized it’s time to get back on track. My pants are getting a little too snug after a month of eating out and drinking like a fish. I’m re-introducing my sloth-like body to the concept of exercise (hopefully in a way that won’t send it whimpering in defeat), and making smarter choices, even if they are small ones. Last night, instead of partaking in the “pizza” aspect of our Steakhouse Pizza, I grilled my portion of steak and then got creative: 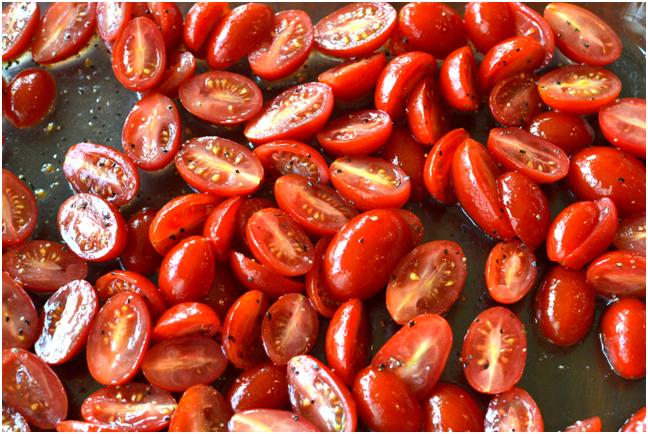 I tossed some cherry tomatoes with a tablespoon of olive oil, a tablespoon of red wine vinegar, and a teaspoon of honey. I added a little salt and pepper and roasted these bad boys at 400 degrees for about 40 minutes. Here’s what I got:

Sweet, savory, with a hint of carmelization, thus proving that my success with introducing more veggies or savory fruits increases when the foods in question are roasted. This was a nice little side dish to my steak that was so flavorful and filling, I didn’t miss the crust/cheese one bit (ok, maybe a little bit, but not as much as I feared).

As I was eating, however, I had to remind myself that dumping these over cheese grits would probably defeat the “healthier eating” purpose.

But, if that’s your thing, can I at least smell your breath? 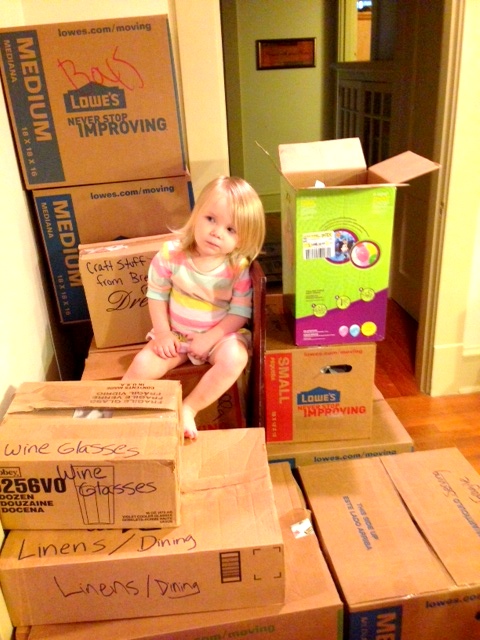 At the beginning of the year, we set a goal to sell our house and purchase a new home that was better for our family. As much as I loved our house, the layout was impractical for our kids (especially with a soon-to-be teenager), and the utility costs of a poorly insulated, 100 year-old home were threatening to sink us. Within a week of New Year’s, we launched “Operation Sell The House 2014.”

I think moving is kind of like child birth in that you tend to block out how horrible and traumatic it was the last time, because if you didn’t, you would never, ever do it again. As my OCD-ish tendencies demanded, I attacked the selling/buying/moving process with an intensity that my husband frustratingly refers to as my “tunnel vision.” We cleaned, packed, and staged like our lives depended on it. While I will spare you the details, I feel like the last four months have been a marathon of work, stress, upheaval, tears, frustration, and ultimately success. We sold our house quickly, and despite the frustrations of just getting to the closing table, came away happy.

Thus began the frantic marathon of house showings to find a new house, and the debates of budget, neighborhood, and deal-breaker priorities. We finally found a great house in a great neighborhood, successfully executed the move, and have slowly been settling in. That’s the tough part about moving though–life doesn’t stop or give you a vacation to get it done. We still had school projects, business trips, and for me, trying to keep my freelance clients happy. Add cranky-pants Bean into the mix and yeah…just yeah. But we got it done, so everything should be awesome.

However, months of being surrounding by boxes and chaos have taken their toll on me. Instead of being happy and excited in our new house, I’ve felt overwhelmed and unsettled by all of the work still left to do. I am so ready for everything to be “done” already! When you are already neurotic and high-strung, feeling like everything is in a state of chaos is alternately depressing and paralyzing. First, we had a couple of unexpected surprises, like a dishwasher that requires immediate replacement because it sounds like an F5 tornado and leaves the dishes looking worse than they were before. Unpacking and organizing seems to progress at a snail’s pace, and we still have a lot of organizing ahead of us before we can declare unpacking complete. My dad reminded me that moving is one of the top four most stressful life experiences, and that it will probably take a year before the house feels like home. So, I get why the frustration lingers. After months of being in “project survival mode,” I am still struggling to get back in to “living normally” mode. Our schedules have changed, as has our neighborhood, and we are adjusting to 1000 changes to all those little routines, from grocery shopping to bill paying. Heck, even my email address had to change, so it’s no wonder I’m a little frayed around the edges.

As unsettled as I have been, I’m still grateful we pulled it off and am looking forward to “normal” day.

Ha! Like anything is ever normal in our house: 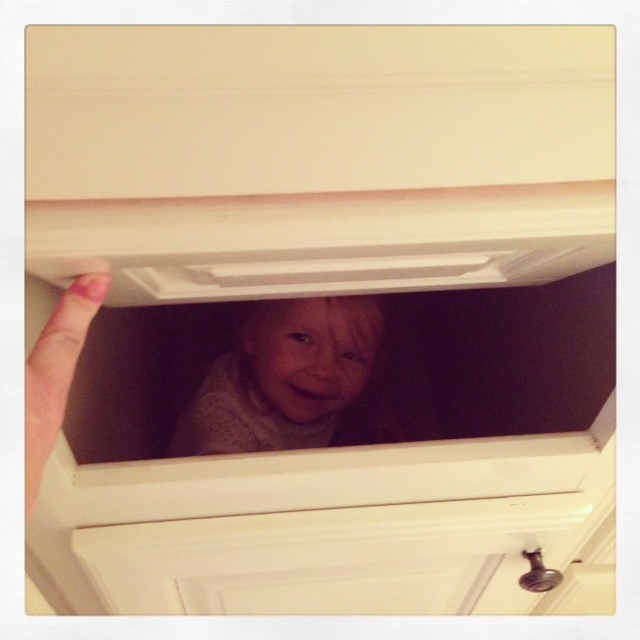