The jalapeno plants are in full swing, which means I’ve been a busy girl.

I am BACK! Where have I been, you ask? I wish I had a cool story, but alas, we all know that I am too much of a dork to generate any really juicy tales.

Last week, I cut my right index finger on a metal door frame at work, in a comedy of errors that resulted in a trip to the doctor, a round of antibiotics and a tetanus shot. Let me tell ya, I forgot just how not fun a tetanus shot can be. I spent several days feeling like my arm had been repeatedly smacked with a baseball bat, and even began to wonder if my husband was secretly elbowing it while I was sleeping. Meanwhile, my finger was a bloody mess of grossness that throbbed in time to my pulse, and I was generally a whiny, snarly grump.

As a result, I haven’t been able to really write or type, and when I can, it usually has been work-related…sigh. Just my luck that I get hurt at work, but not enough to garner some time off. How lame is that?

Buuuttt, the awesome news is that my oven FINALLY came yesterday! Woo Hoo!

I promptly made meatloaf, brownies, mac and cheese, and a celebratory cocktail.

Yes, the connection between a new oven and a cocktail is tenuous, so we could also label it a post-non-rapture celebration if that makes anyone feel better.

As you may recall, my less that two year-old Kitchen Aid oven broke on Easter.

Yep, it broke about a month after the warranty expired, and the power of Google enlightened me as to just now much of a lemon this range really was.

After one hectic week of shopping, we settled on a new range, and ordered it from Lowes.

That was on May 2nd.

No oven in sight.

I am not a happy camper. In fact, I am starting to feel like a banshee:

At what point is it reasonable to stalk the Lowes appliance guy, take him hostage and demand my oven?

Our little birthday road trip was a success! Friday afternoon, I hustled after work, rounded up the troops and we hit the road for Dallas. Despite encountering quite a bit of traffic, we made it to our hotel with just enough time to unload our luggage before dinner. I had made online dinner reservations at P.F. Changs earlier that day, and was determined to eat myself sick before bedtime. I am not usually a chain restaurant kind of girl, but I have a secret weakness for P.F. Changs…sad, I know. We had a great dinner:

I ate an embarrassingly large quantity of food, thereby creating a Budda-belly that I am sure will last for days to come. It’s Diet-City for me today…*sigh*…but it was soooo worth it.

The next morning, the excited heathens were up early, ready to head to the amusement park and bouncing off the walls in the interim. However, since the park did not open until 10:00, we had an uncomfortable chunk of time to kill. As I am sure any mom of boys knows, trying to contain two excited kids in a tiny hotel room is a recipe for disaster. So, my husband and I loaded them in the car, under the guise of “exploring.” We stumbled across a Whole Foods, and I proved my true colors as a small town, Louisiana girl by dragging everyone inside to see just what the fuss is about. Ten seconds later, I developed a huge crush on Whole Foods, and spent the next twenty minutes gawking and bemoaning my town’s sad state of having no Whole Foods of our own. My husband pointed out that my OCD was probably just enamored with the perfectly arranged produce section.

After my husband dragged me out of there kicking and screaming, we finally headed to the amusement park.

We rode plenty of rides, including one that sufficiently gave my youngest son a heart attack. How was I supposed to know it went upside down? Granted, I probably should have asked before dragging him on it. 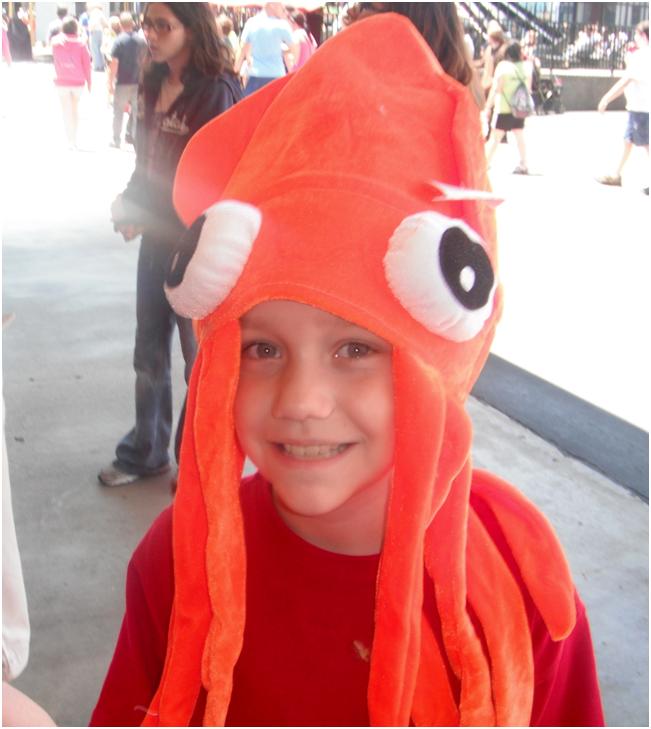 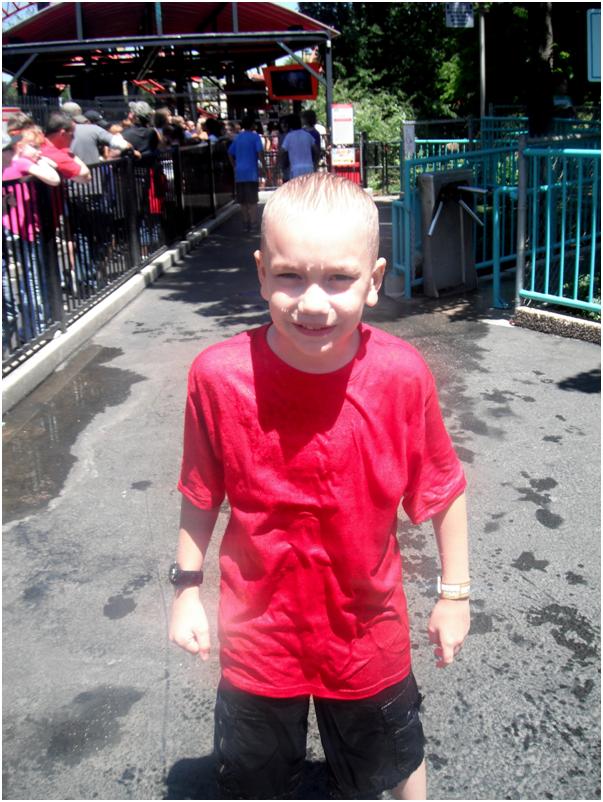 We got wet, and laughed about it to no end. 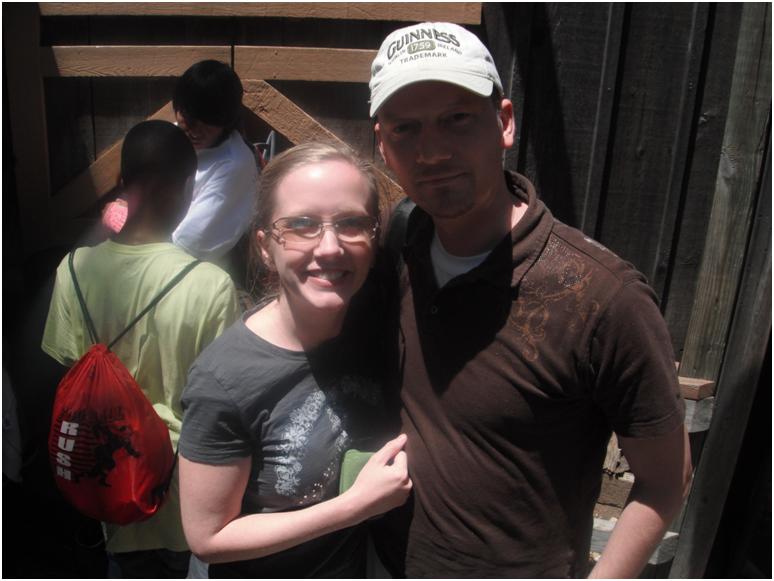 We waited in lines, but they weren’t so bad.

And we finished out the day with smiles all around. The poor boys were so tired that they could barely keep their eyes open during dinner that night, and slept through most of the car ride home yesterday.

Overall, this was a great trip for the kids, since it pretty much centered only on the amusement park outing. However, I wish we had more time and money to explore the city and what it has to offer. If I were to do anything differently, I would have done more research ahead of time, and maybe I could have slipped in some other interesting activities or sights. But, I think we did pretty well for quick, weekend birthday trip, especially since our time was limited and our budget was maxed out on the amusement park tickets, parking and food. We made it home early enough yesterday to get the laundry going, check the garden and relax over drinks on the porch.

Now that we’ve made it through the gauntlet of May birthdays and holidays, things can hopefully settle down into a more relaxed routine.

That is, if the Lowes guy delivers my oven any time THIS CENTURY!

We just got back from our little weekend road trip. I’ll post all the gory details tomorrow…after I unpack, conquer the mountain of laundry and have a glass of wine…or three. In the meantime, I am celebrating the love of my life: 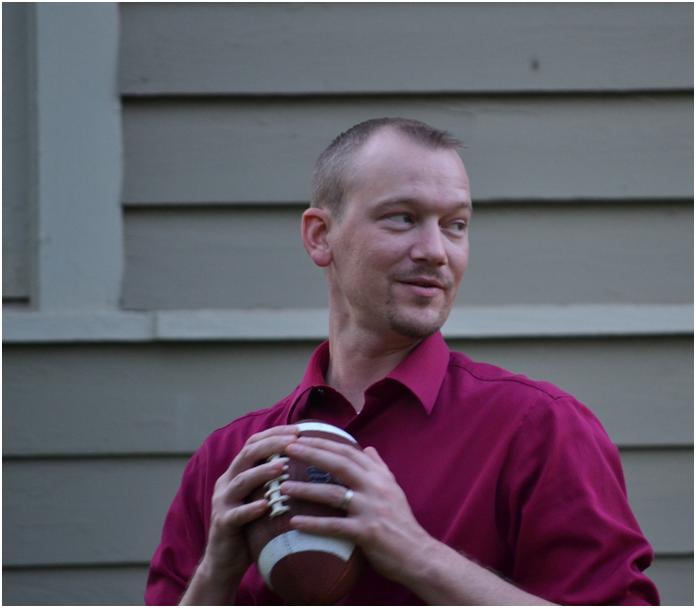 And the light of my heart:

Tomorrow, our brood is setting off on a little birthday road trip. This weekend is both my husband and my oldest heathen’s birthday…I know, it’s weird. In fact, my husband will be the first to tell you that, if I just could have held out four more hours, he and our son would have had the same birthday. I usually meet such statements with an overly dramatic sigh, followed by a harpy-like dissertation of just how fun it was to carry and birth a 10-pound Demon-Baby. Dude, that earns me one-up-man-ship for LIFE!

Given that my birthday, their birthdays, my grandmother’s birthday, various friends’ birthdays, Mother’s Day and an assortment of graduations and First Communions usually fall in May, we often refer to this month as “The Gauntlet.” May kills our expendable income faster than Christmas. I often feel guilty because either my husband or my son ends up with a last-minute, thrown together birthday celebration. Usually, it’s my husband who gets the short end of the stick, because I feel marginally less guilty for throwing him under the bus. However, he always puts the kids first and spoils them rotten, so he usually isn’t fazed by the lack of elaborate birthday celebrating.

But this year will be different! We decided to take a little family weekend road trip to Texas, and spend Saturday at an amusement park. We’ll get to sleep in a bed I don’t have to make, eat food I don’t have to cook and ride enough rides to turn my tender husband green, much to my gleeful amusement. Isn’t it awesome how well their birthday weekend benefits me?

Just kidding! I really wanted to do something fun for the both of them, and we haven’t done any fun family traveling in years. Come to think of it, I don’t think the kids have stayed in a hotel since they were toddlers, so this should be REALLY interesting.

Proof It’s Not My Fault

The past few days have been a flurry of activity, and I confess, I’ve officially dropped the ball. I sure proved that with my lame-brain actions this morning.

I probably should not have waited until we were walking out the door for school this morning to ask whether the heathens actually did their homework last night. What kind of mom am I that I didn’t worry about last night’s homework, oh say, last night? Yesterday evening, I blew through the door, managed to make dinner and even played a video game with the boogers, all while completely forgetting the never-changing fact that they always have homework.

So, imagine my shame when, on the way out the door this morning, I realized I had forgotten something so ridiculously unforgettable. Embarrassment aside, I probably should have chalked it up to a bad day and quickly moved on. But, of course, my brain was simply not that logical. Instead of acting like a rational, sane, reasonable mother, the forgotten homework registered in my head, and less than 2.5 seconds later, I screeched to the boys,” OH MY GOD, did ya’ll even DO your homework last night?” in a voice I am sure only dolphins and dogs could hear.

Both my husband and the kids stopped dead in their tracks, and got the “oh boy, Mom’s having a fit, so don’t make any sudden movements” look. I hate that look…it makes me feel like even more of a dork than I already am. Honestly, what the heck did I think I could do at that point? Drag them back into the house and make them complete 30 minutes worth of assignments in 5 minutes or less? It was time to suck up my mistake and get over it. But, instead, I stood frozen with what I am sure was a near-psychotic expression on my face.

Luckily for me, my oldest child gives me the big, huffy eye-roll, and says “um, yeah, Mom…we did all that yesterday.”

And I got to start my day with the knowledge that, not only did I drop the ball, but I am neurotic beyond belief.