After spending a fortune on baby stuff, we’re getting an idea of what we love, what was a waste of money and what we couldn’t live without.

Let me tell ya a little bit about this:

This was the best $15 I spent. When I first bought this timer gadget, my husband looked at me like I was an insane waster of money. After all, we have iPhones and they do everything, right? However, unlocking our password-protected iPhones and waiting for apps to load takes time…precious seconds we don’t have when juggling a newborn. I admit, this gadget is so ridiculously simple in concept that it seems unnecessary. But, as our entire family will tell you, I now live with the Itzbeen timer. This thing was a lifesaver in the hospital. I could keep track, at a glance, of how long it had been since Bean ate, since we changed her diaper and even since I had my pain medication. When I was recovering from surgery, this was my mental back-up when pain and sleep deprivation clouded my brain. Six weeks later, I still use this 24/7.There’s no fiddling or fussing. I just push the appropriate button, and the timer for that particular activity resets so, two sleep deprived hours later, I know how long it’s been. I don’t have to use up valuable post-partum brain power doing the math or trying to remember when I last fed her, changed her, or gave her medicine. It even has a flashlight so I’m able to find the pacifier at night without waking her up. Also, my husband can instantly see where we are at in Bean’s schedule. If she’s crying and I’m in the shower, he can check the timer and know instantly whether she’s hungry or just fussy. So yeah, it was $15 well spent.

As for baby carriers, I researched, over-analyzed, and finally bought both the Moby: 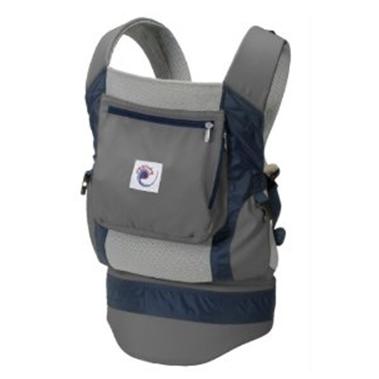 They both had top ratings and awesome reviews, and I assumed we would use them both. Sadly, the Moby was a disaster for us. My husband and I tried to figure it out, read the instructions repeatedly, and watched the videos online. Even with extensive practice, we just could never finagle it. Bean was always so awkwardly positioned that we spent the entire time checking and adjusting her. Also, the Moby was too much of a pain in the rear to use. After dragging the tails through the Target parking lot as I tried to put it on, I finally conceded that the Moby just wasn’t for us. Even if we had been able to figure it out, I don’t think that the layers of heavy fabric are practical for the hot, humid Louisiana weather.

The Ergo, however, is the BEST. Either my husband or I use it every day. It’s a piece of cake to get on and off, and to get Bean in and out of. I use it when we shop, go to the library and just about everywhere else. My husband often calms a fussy Bean by strapping on the Ergo and walking laps around our house. Our Ergo was an investment, but six weeks later, I would buy it again in a heartbeat.

So, that’s the skinny on our first round of baby products. The jury is still out on the rest of Bean’s stuff, but I’ll let ya know.