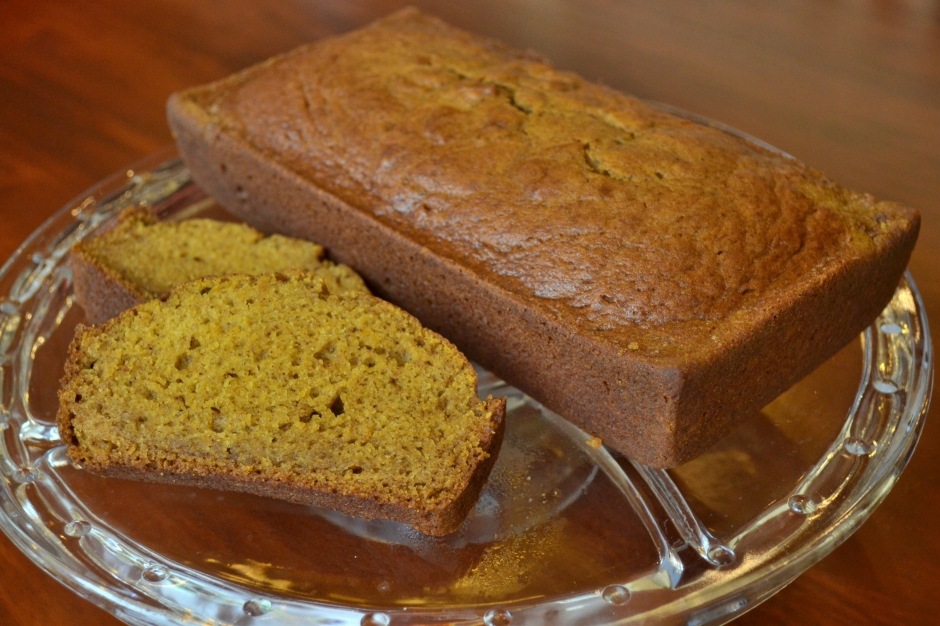 After three months of no rain, magic water fell from the sky this weekend, finally allowing temperatures to drop below 80 degrees. We procured Halloween costumes for the Heathens, put in more work on planning the school Halloween carnival, and celebrated the return of the braised pork and roasted butternut squash pizza from our favorite restaurant. This week is shaping up to be busy beyond belief with carnival preparations, but I decided to hit the pause button yesterday and whip up that pumpkin bread I’ve been longing for. This recipe is super easy, an since it makes two loaves, you can surprise someone special who also needs a little autumn pick-me-up.

This bread tastes better the next day. Serve warm with a little softened butter and bask in the flavors of fall!

After several hectic weeks, and an unfortunate tendency to overbook, overdo and overanalyze everything, we slowed things down around our house this weekend. I always seem to forget how fine the line is between “active” and “overwhelmed,” until I’ve jumped past it into the land of Stressville.

Yesterday started with a marathon canning session, because our garden is producing food faster than we can eat it. My husband has managed to keep the garden healthy despite the continuing drought, and I’ve kept my green-thumb-of-death far away from it. The tomatoes, eggplant and cantaloupe aren’t quite ready yet, but we have jalapenos and cucumbers coming out of our ears. After five more jars of jalapeno jelly, I tried my hand at sweet pickles:

That was certainly an adventure, because as a pickling virgin, I was unprepared for the otherwise predictable fact that cucumbers float. How in the heck do people keep them from popping above the rim and contaminating the lip of the jar before they can get the lid on? Am I missing something here? Anyway, these jars will have to cure about four to six weeks before I can taste- test them to see whether my first foray into pickles was epic success or depressing failure. As a relative canning newbie, the odds are split pretty evenly between these possibilities. Meanwhile during my canning sprint, the heathens goofed off, as they are wont to do:

Yes, that was my child wearing gloves, when the temperature outside was roughly 98 degrees. Furthermore, you should note that he cut all the fingers of said gloves off, which apparently occurred WITH MY HUSBAND’S BLESSING. My oldest has since been notified that he should run all scissor-generated wardrobe modifications by ME, before undertaking them…sigh. His brother managed to contain his amusement:

Probably because he was thinking, “better you than me!”

We watched a rare late afternoon storm from the shelter of our front porch: 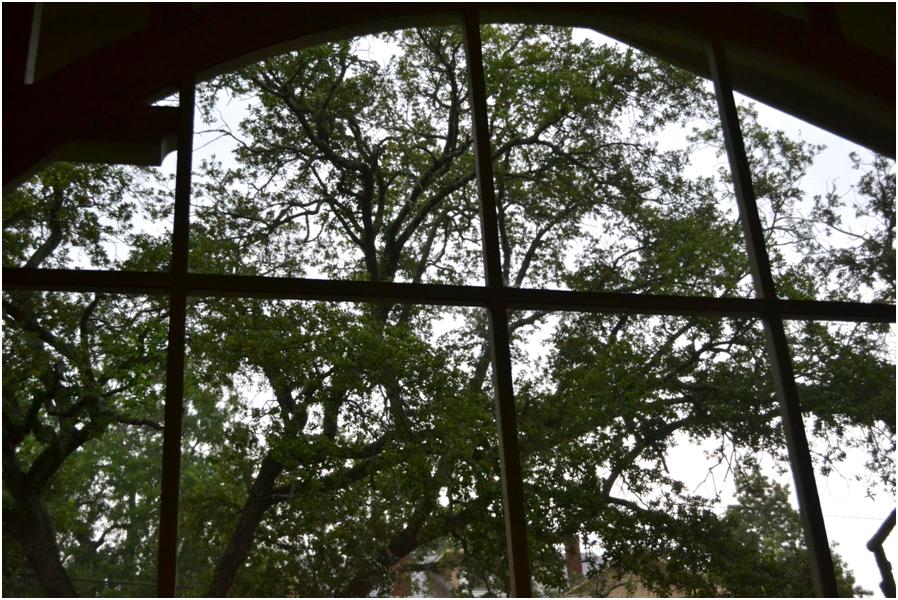 And then headed inside for dinner.

Perhaps the best part of the day was my surprisingly successful bread experiment. In last month’s Food Network Magazine, I saw a recipe for something similar to Macaroni Grill’s bread. Since my youngest heathen loves this bread and can eat his weight in it, I decided this copycat recipe was worth a try. After all, I was in the need for some cool mom points to start my week off right. I mixed up the dough in my stand mixer, and let it rise in our laundry room, since the heat in humidity in that room cuts our rising time in half:

Forming the loaves was easy, because this dough was very forgiving and not at all sticky:

The finished product was perfect: 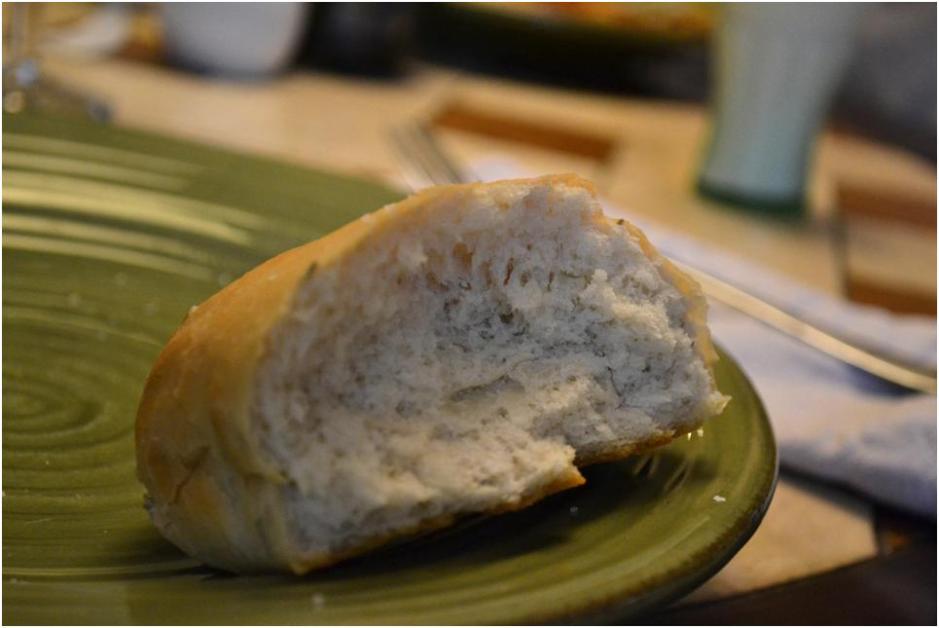 So, yes, I did in fact rack up some cool mom credit. The only way I deviated from the recipe was by omitting the additional sprinkling of rosemary over the top of the loaves. Rosemary is a strong enough herb in this recipe that the flavor already comes through well enough, and the additional rosemary garnish probably would have freaked the heathens out anyway. Want to try it? Here’s the recipe I found at Food Network:

Stir the yeast, sugar and 1/4 cup warm water in a large bowl (or in the bowl of a stand mixer). Let sit until foamy, about 5 minutes.

Add 1 tablespoon olive oil, the flour, 1 1/2 tablespoons rosemary, the fine salt and 3/4 cup warm water; stir with a wooden spoon (or with the dough hook if using a mixer) until a dough forms.

Turn the dough out onto a lightly floured surface and knead, dusting lightly with flour if necessary, until smooth and elastic, about 10 minutes. (Or knead with the dough hook on medium-high speed, adding a little flour if the dough sticks to the bowl, about 8 minutes.)

Brush a large bowl with olive oil. Add the dough, cover with plastic wrap and let stand at room temperature until more than doubled, about 2 hours.

Brush 2 baking sheets with olive oil. Generously flour a work surface; turn the dough out onto the flour and divide into 4 pieces. Working with one piece at a time, sprinkle some flour on the dough, then fold the top and bottom portions into the middle. Fold in the sides to make a free-form square. Use a spatula to turn the dough over, then tuck the corners under to form a ball. Place seam-side down on a prepared baking sheet. Repeat with the remaining dough, putting 2 balls on each baking sheet. Let stand, uncovered, until more than doubled, about 2 hours.

Preheat the oven to 400 degrees F. Bake the loaves 10 minutes; brush with the remaining 1 tablespoon olive oil and sprinkle with the kosher salt and the remaining 1/2 tablespoon rosemary. Continue baking until golden brown, about 10 more minutes. Transfer to a rack to cool. Serve with olive oil seasoned with pepper.