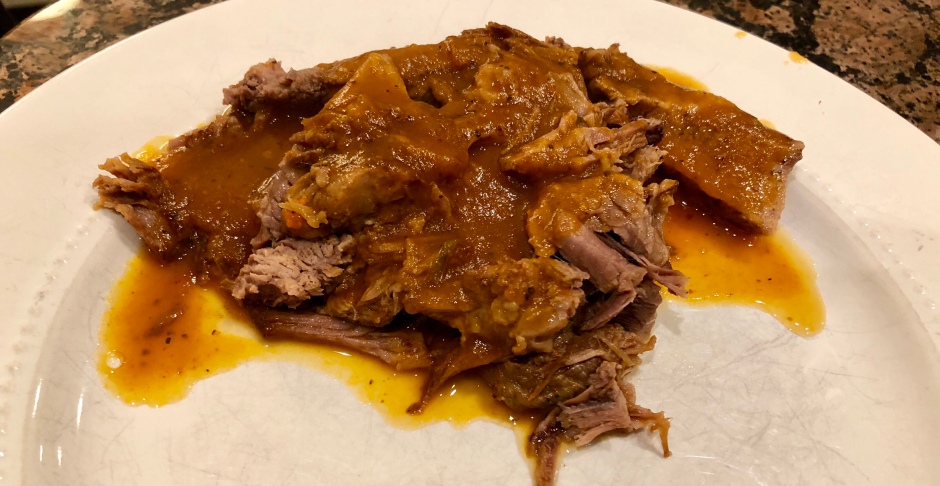 I am all about comfort food lately, but between shopping, baking, running 1000000000 errands, wrapping gifts, etc., I haven’t had a whole lot of time to enjoy extended cooking sessions. So, I got creative this week and adapted my favorite braised brisket from Guy Fieri’s cookbook for the Instant Pot so I could have what is typically a Sunday dinner on a weeknight. Here’s how I did it:

I seasoned the brisket and browned it with the Instant Pot set on the Sauté setting. It took a little maneuvering, but it worked: 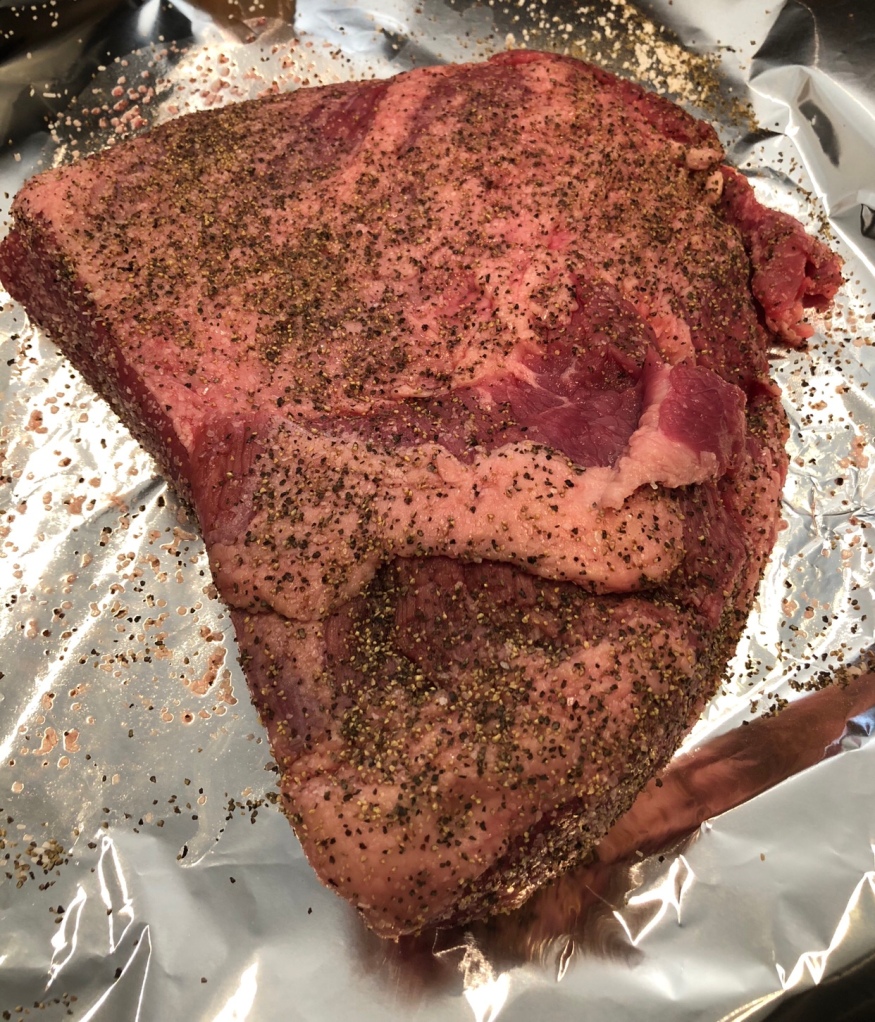 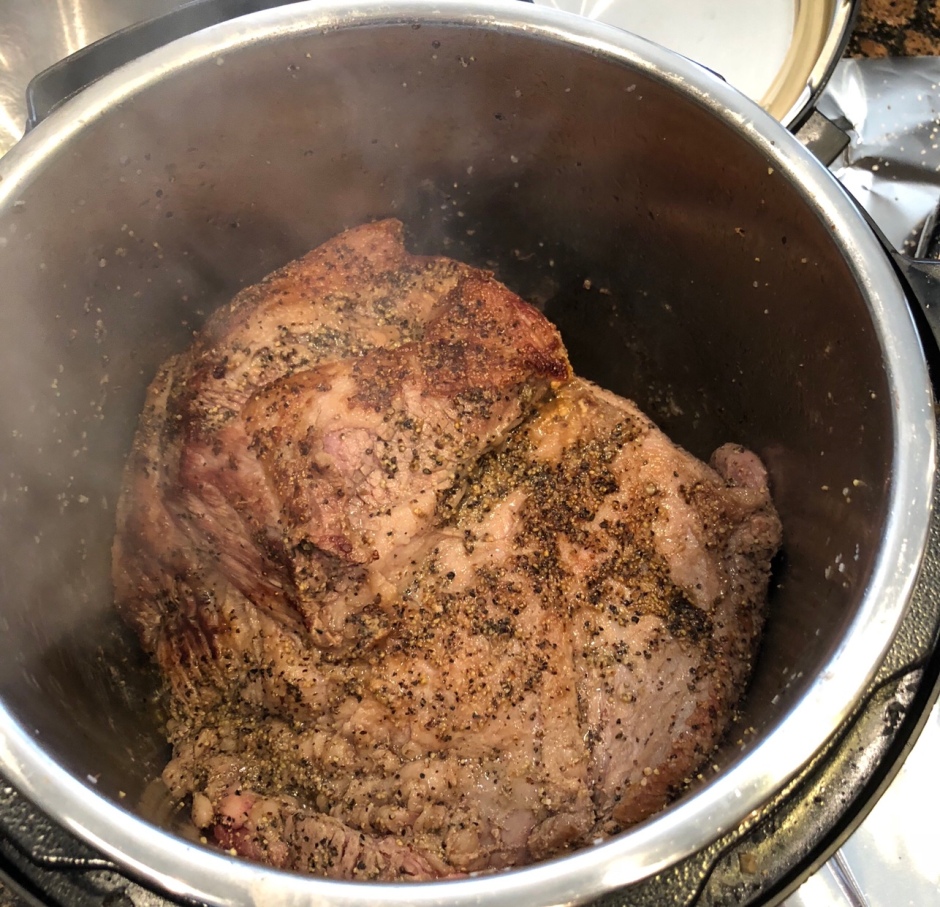 Next, I chopped up some shallots, carrots, onions, celery, and leeks, and put them on top of the brisket:

I combined a bottle of chili sauce with some beef broth and poured it over the top: 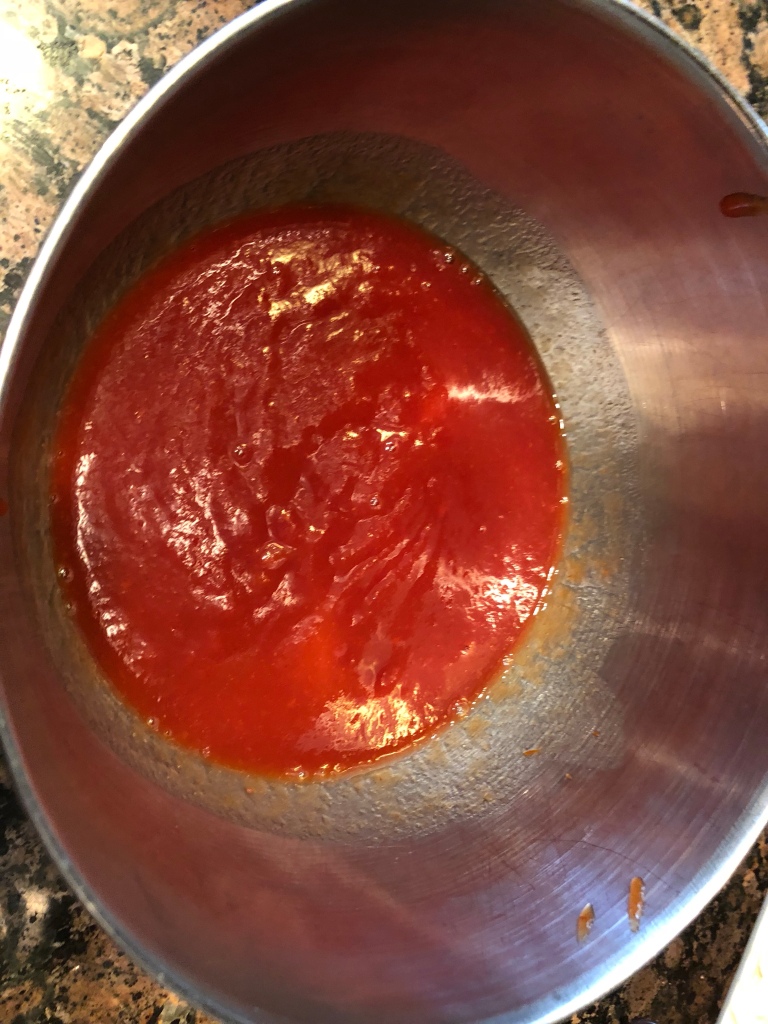 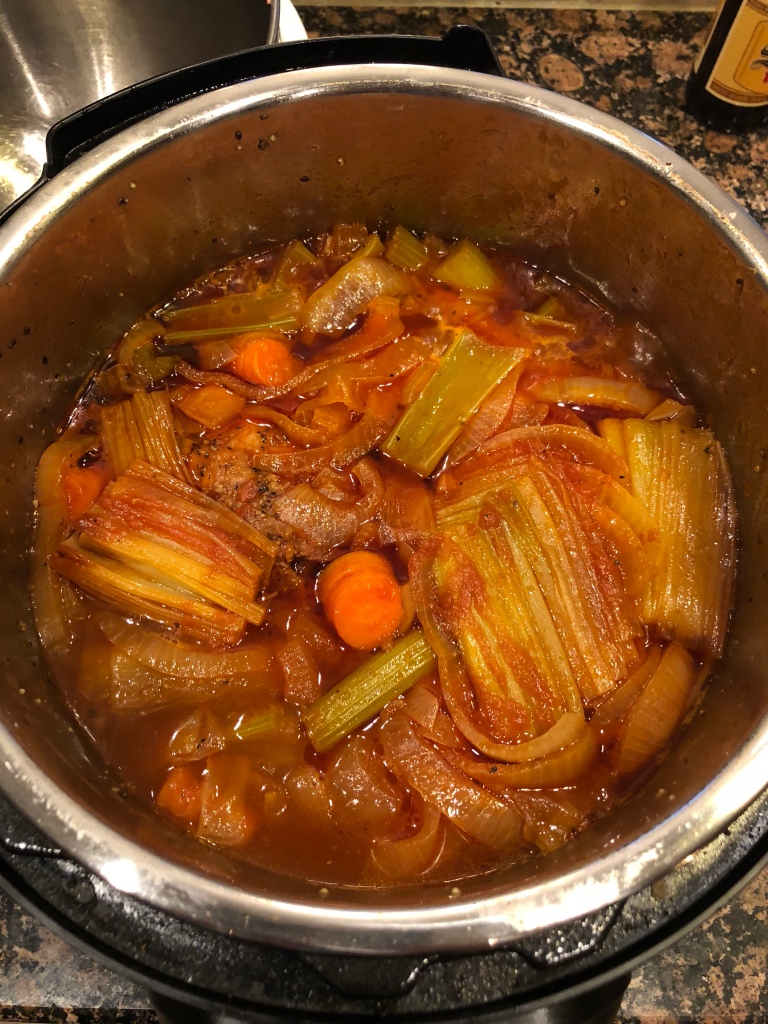 So, this is what it looked like. I removed the brisket to a cutting board and set aside. I broke out the immersion blender, and blended the juice/sauce/veggies in the Instant Pot until combined into saucy deliciousness. After slicing the brisket, I returned it to the pot for a quick sauce bath, then served with more sauce spooned over the top:

It was dang tasty, and nearly effortless.

Season brisket with salt and pepper. Set Instant Pot to the Sauté setting and when hot, add canola oil. Brown brisket on all sides as best you can. Top brisket with onions, leeks, shallots, carrot, and celery. In a small bowl, whisk together chili sauce and beef broth, and pour over brisket. Secure lid on Instant Pot and set to Manual for 60 minutes. When cycle is complete, do a quick pressure release. Turn brisket over, add beer to Instant Pot, and baste brisket with liquid and veggies. Place lid back on pot, and set to Manual for 30 minutes. Let pressure release naturally for 20 minutes then do a quick pressure release.** Remove brisket to cutting board and slice. Using an immersion blender, blend the liquid and veggies in the Instant Pot until smooth. Return brisket to the Instant Pot, cover with sauce, then serve, topping with more sauce if desired.

**If you have the time, let pressure release naturally and let brisket rest another 20 minutes or so after the pin drops**

I’ve been in school-project-hell this weekend. G-Man has a social studies project due in a couple of weeks, which any mom knows means that we all can kiss our free time goodbye until it’s done.

I really, really struggle with school projects, to the point that I truly dread when they come up. I want my kids to do them on their own, because that is the whole point, right? However, in the age of growing parent competitiveness (i.e ridiculousness), I learned early on that some parents’ idea of “helping” their kids is actually doing the project for them. I hate seeing super-slick class projects that you just know were done more by the parents than the child, if not in their entireity. Normally, I shrug it off, but I can’t help wondering if my child’s honest effort will be compared to their peers, and found lacking because I didn’t ensure all that glossy polish by practically doing the final product myself. Further, I don’t want my kids to feel substandard because their classmates’ projects look like professional advertising materials, while ours reflects the true work of a 4th grader. I am in a constant battle to figure out how to help my child be successful, without crippling him by doing too much. I wish I had the answer, but in the meantime, I still bleeping hate school project time.

In semi-related news, I tried a new recipe last night that I found in this month’s Southern Living. This King Ranch Mac and Cheese seemed like just the kid-friendly meal I needed to take the sting off our marathon report-writing session. This was dang tasty, and much faster to put together than I anticipated. The boys raved about it, so you know it’s not just the pregnancy talking. 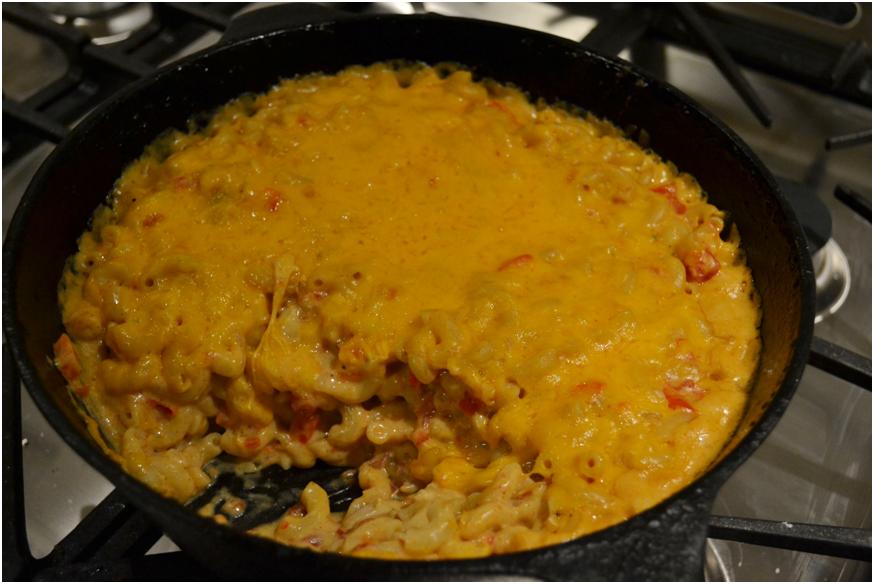 
By following this dinner with our first King Cake of the season, I got to relish in a little “you’re the best mom ever!” That is, until I announced that it was shower time…then I was back to being Captain Meanie-Pants.

But, I’m cool with that. 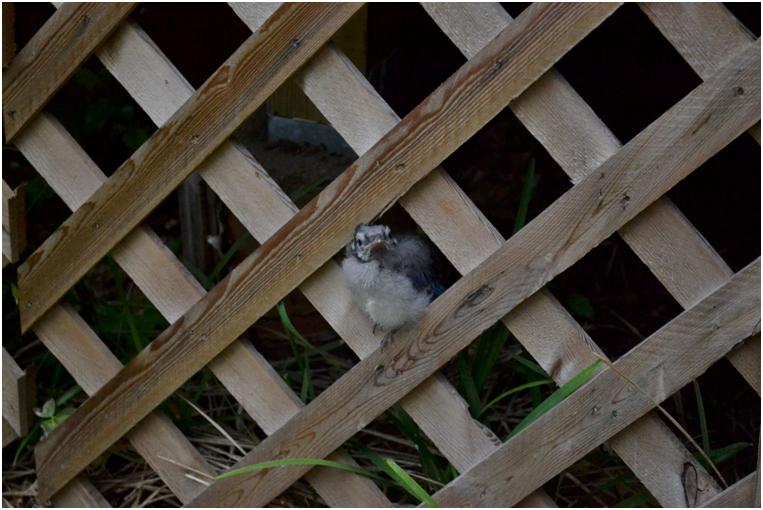 When I came home from work today, this little guy had taken up residence in the base of my deck. I gave him wide berth, but he somehow managed to give me the “Whatchoo talking bout, Willis” look from every angle. 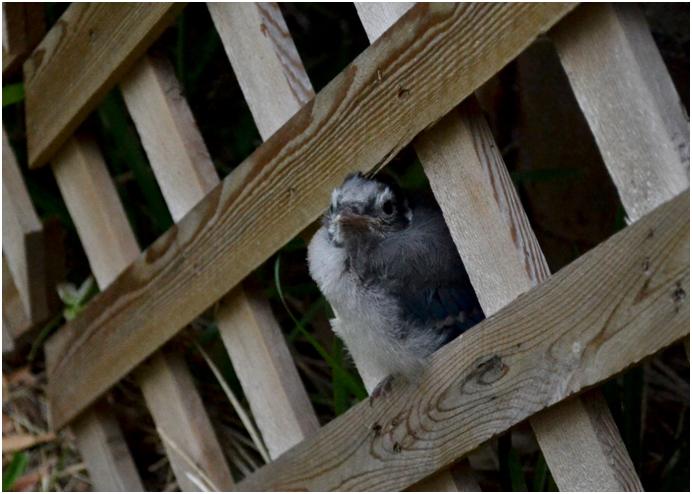 I am pretty sure that look is the “bleep off” version of bird. Hopefully, he’ll move along soon, because my boys will start thinking he’s a pet if he hangs around much longer.

In completely unrelated news, the garden continues to produce food faster than we can eat, can and freeze. I got a little desperate this weekend, and did a frantic search for eggplant recipes, with the hope of reducing the pile of vegetables that is overtaking my kitchen counter. I landed on Moussaka (which I can’t even pronounce, by the way), and decided that a little experimentation was in order.

I certainly did not have high hopes for this recipe. First, it contained a bunch of ingredients that regularly send the heathens into riot-mode. Second, I am a Louisiana girl, and my pathetically underdeveloped palate is still confounded by the spice combinations that are in a lot of Greek food. Indian food too, for that matter. Lastly, just the simple fact that eggplant is the main ingredient was enough to have my husband doing the dramatic choking/dying pantomime. *Sigh*

Well, lo and behold, we all liked this dish, and I got to rack up the cool mom points for a garden-fresh meal. It was deliciously rich and cheesy, and the eggplant was well-disguised from the heathens’ vegetable-laser-vision. I don’t know how “authentic” this recipe is, but our simpleton taste buds sure enjoyed it, and I was able to reduce my vegetable invasion for at least a day. 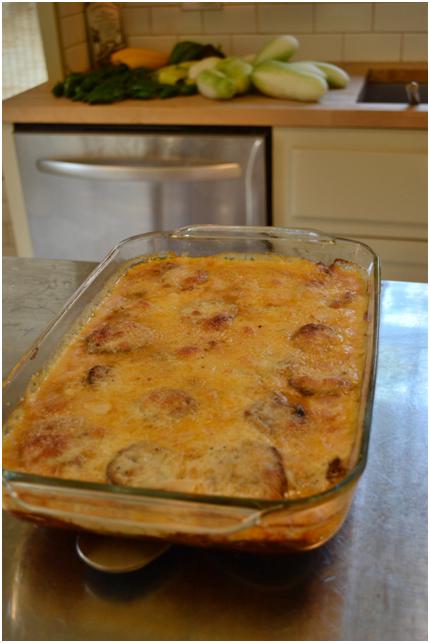 I served the Moussaka with a simple Greek salad (also using veggies from the garden): 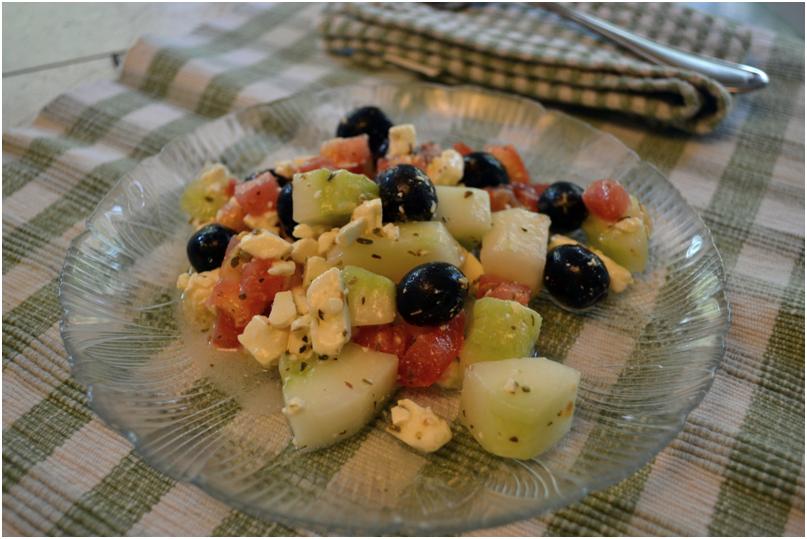 And got to feel like the Saturday dinner superstar. Want to have a Moussaka adventure of your own? Here’s the recipe I used: 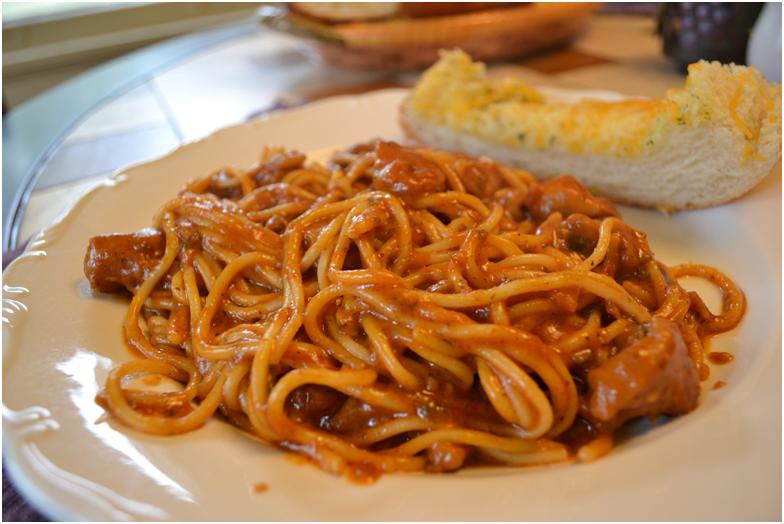 A while back, Jeanne asked me for J’s “Big Mamou over Pasta” recipe. I asked J to cough it up, and she lent me her battered copy of Paul Prudhomme’s Louisiana Kitchen. In true Southern Girl fashion, I didn’t need to check the index; I simply opened the book to the most stained, wrinkly page, and there it was. The recipe is somewhat long and involved, but the flavor is absolutely amazing and authentic. Here ya go Jeanne:

Bring hot water, oil and salt in a large pot to a boil. Add spaghetti to the pot, Return to boiling and cook to al dente stage. Do not
overcook. Drain spaghetti into a colander; run cold water over strands. (If you used dry spaghetti, first rinse with hot water to wash off starch.) After the pasta has cooled pour a liberal amount of vegetable oil in your hands and toss spaghetti. Set aside. Meanwhile, combine the seasoning mix ingredients in a small bowl and set aside.
In a 4-quart saucepan, combine 1-1/2 sticks of the butter, onions and garlic cloves; sauté over medium heat 5 minutes, stirring occasionally. Add the minced garlic and seasoning mix; continue cooking over medium heat until onions are dark brown, but not burned, about 8 to 10 minutes, stirring often. Add 2-1/2 cups of the stock, the Worcestershire and Tabasco; bring to a fast simmer and cook about 8 minutes, stirring often. Stir in the tomato sauce and bring mixture to a boil. Then stir in the sugar and 1 cup of the green onions; gently simmer uncovered about 40 minutes, stirring occasionally.
Heat the serving plates in a 250F oven. Combine the ingredients of the chicken seasoning mix in a small bowl; mix well. Sprinkle over the chicken, rubbing it in with your hands. In a large skillet melt 1-1/2 sticks of the butter over medium heat. Add the remaining 1 cup green onions and sauté over high heat about 3 minutes. Add the chicken and continue cooking 10 minutes, stirring frequently. When the tomato sauce has simmered about 40 minutes, stir in the chicken
mixture and heat through.
To finish the dish, for each serving melt 2 T butter in a large skillet over medium heat. Add one-sixth of the cooked spaghetti (a bit less than a 2 cup measure); heat spaghetti 1 minute, stirring constantly. Add 1-1/4 c chicken and sauce and 2 T of remaining stock; heat thoroughly, stirring frequently. Remove from heat. Place spaghetti onto a heated serving plate. Repeat process for remaining servings.